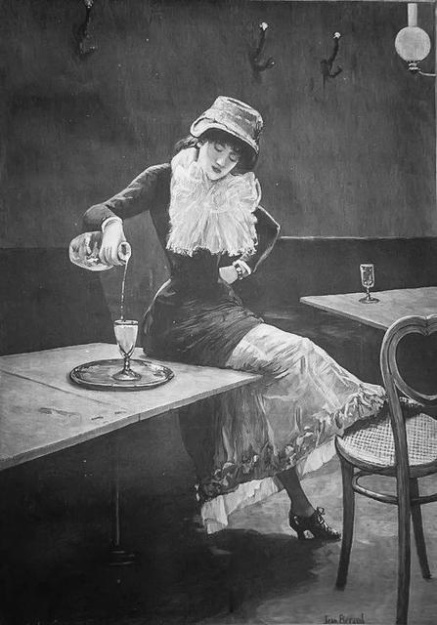 Of course I remember when she came into the cafe that afternoon. I would have said she was a woman between the age of 25 and 30. She was elegant but you could tell her clothes were rather worn. She was wearing a little brown hat. She just sat at a table near the window, all by herself. I got up to take her order. She asked for a Pernod. She had curly blond hair. Her skin was very pale, almost translucent, and her eyes were green and slanted, like a cat´s. She looked preoccupied. She didn’t attempt to make any small talk or anything. I knew from her accent she was a foreigner, probably British or American, we get so many of them around here. But I had never seen her before.

I was quite busy that day so I didn’t pay that much attention to her… Of course I found it quite unusual to see her order four glasses of liqueur in the space of one hour. But I thought perhaps she had some “peine de coeur”, that her lover may have left her. Young people are  more complicated today! They all want love…

I will always wonder would things have been very different if I had approached her, would I have been able to alter the course of events… I could almost feel her sadness and loneliness but I didn’t want to give her the wrong impression. I’m not that kind of man.

Yes, she had a bag with her. No, of course, I didn’t notice anything unusual. I certainly didn’t notice a gun, if that’s what you want to know. I glanced at her from the counter from time to time and at some point she opened her bag, got a little mirror out and put some powder on her cheeks. That surprised me somehow because she looked too downcast to plan to meet anybody. And she no longer seemed to be expecting anyone either.

After a while she paid and prepared to leave. She was a bit unsteady on her feet but not stumbling drunk. She went for the door and I called after her because she had left her hat on the back of her seat. She thanked me, at first keeping her eyes to the ground but then she looked up and gave me a little smile. Her lips were full and red and I could smell the anis on her breath. She grabbed her hat and in one instant she was gone.

Of course it was a terrible shock to me to hear about the tragedy and see her picture in the paper afterwards. I recognised her straight away. They said immediately after she left the cafe she walked to her lover’s flat in Montparnasse and shot him and his wife. Athough the wife survived. A cruel face he had that chap. He was half German. Doesn’t surprise me one bit. A few years older than the girl as well I would say. Well, I hope they won’t be too harsh on her…

The man sighed and adjusted the towel on his arm. He glanced at the dirty glasses in the sink.

” Well, if you don’t mind, gentlemen, I’ve got to get on with my job. Got a party coming tonight.”